Since my last blog I’ve obtained bees, but instead of the three or four I was expecting, only one colony was available to us. This morning at 0500 we set off, Khansa, Raman and I, to collect the Hive full of bees. A forty minute walk later we reached the Apiary of the man supplying, just before the bees emerged to begin foraging, which they do very early here, and secured the hive with four batons screwed to the sides and a piece of fine wire mesh pinned over the entrance with drawing pins. We lashed the hive to two bamboos and we were ready for the walk home. Imagine, rough roads, steep hills and a hive full of bees to carry! When you reach your destination there’s a sense of satisfaction in proportion to the effort needed to accomplish the job in hand. 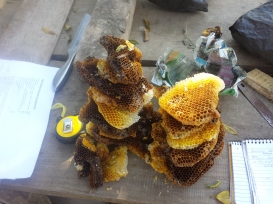 Comb recovered from a log hive where the bees have recently absconded.

The dreaded wax moth is thought to be one of the causes of absconding.

The photo shows A. cerana worker and drone cells. The large number of drone cells is an indication that this colony probably swarmed before absconding.

The Transfer from a framed hive to our TBH

“What the … “ I hear you cry. “ removing comb from frames and fitting it on top bars?” Well you must remember the project is an experiment to find the husbandry most acceptable to local Beekeepers. Note I did not suggest that I am looking for the most “appropriate” or productive way of keeping A. cerana in this rural environment but for the husbandry most acceptable to the individual. The factors that govern this may be convenience, how much time can be devoted to the “hobby”; cost, and ease of construction of the hive etc., plus ongoing running costs; ease of maintenance; productivity; esoteric factors such as the hum, comforting, at least to me and the desire to follow traditional methods; and last but I feel most important, a concern for the importance of Mother nature which to me implies, amongst other biodiversity issues, maintaining the natural balance of feral bee populations in the wild.

Careful husbandry of the bees is allowed by the use of Top Bars or frames. The bee-keepers stock can be increased by control of the swarming instinct which is the the bees natural method of reproduction, by the production of “Nucs” using spare swarm cells, (Queen cells), or by division and the rearing of Queens to keep colonies young and vigorous. These techniques, I think, are almost certainly less wasteful than traditional methods where the bee-keeper collects swarms from the wild or allows them to occupy his log-hives naturally and because of the configuration of a hollow log, has to harvest the honey in a fashion which doesn’t make the well-being of the colony the prime concern. 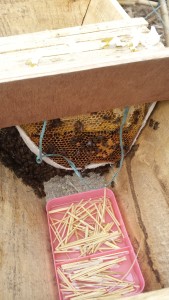 A comb held tight against the top bar by its hammock. below a sugar feeder with straw sprinkled on the syrup.

Apis cerana are well known for absconding when moved or seriously disturbed. My mate Manoj Jimi phoned from the UK, specifically to warn me of this, and I’ve seen it mentioned in several sources I’ve researched, so I’ve pinned a strip of plastic over the entrance reducing it to 4mm. This allows the workers to come and go but will hopefully prevent the Queen from leaving.

The Newton purchased complete with bees. Sitting on TBH 1 which will be their new home. Click on the picture to see the Queen guard.

Anyone who has ever recovered wild comb and re-hived it will know that this is a ticklish operation.  I’ve used “hammocks”, strips of cotton about 2” wide to hold the combs cut from their original home, tight against the top bars. It was necessary to cut the combs carefully from their frames and then lay them even more gently on one of the trapezoidal TBH divider boards in order to trim them to fit the dimensions of the TBH using a very sharp knife. The “hammocks were awkward to get tight, so that the combs were firmly held against the top bars so we tied them about an inch wider than the comb at either end then tied a piece of string on each end to bring the hammock tight against the comb  and to tension it. In order to decide on the size of the slot for the “Queen guard”, to prevent the Queen from leaving the hive I made a series of guards from the lids of plastic storage pots, each cost 25 rupees, then captured a foraging bee in the pot and gradually increased the size of the slot until the bees could just squeeze through. The theory is that, as with A. mellifera, the cerana Queen has a larger thorax and will not be able to squeeze through. My daughter Zoe commented on my last blog but somehow I’ve lost her comment. She asked was the wood treated, with KSC I think she said, which presumably is some sort of pesticide and she also asked what wood we were using. The timber is produced locally by farmers. The trees are felled and then rendered into planks by hand. The logs are secured over a pit on a scaffold with a man above and a man below holding the respective ends of a long saw and with great skill they produce planks. The wood is not treated and unfortunately neither is it properly seasoned. If you look at the photo below you can see that the saw marks are straight up and down and are not produced by a circular saw. The wood is called “Putlikath” , this probably doesn’t help much as it is a Lohrung name, a language spoken by the local people which is totally different from Nepalese except for a few shared words.

Check out the saw marks, this plank was hand sawn.

Although I’ve been stung a few times on the hands, I have been carrying out some fairly drastic surgery  and in my judgement A. cerana seems far more reluctant to sting than the bees at home. A bit of a paradox here is, even allowing that some bees are probably far worse than others, these follow more than any bees I’ve come across at home. After the operation which I like to think we carried out very efficiently, I walked the 50 metres back to my room and as far as I could tell there were no followers. I stretched out on the bed reading a book on bees and after 5 or 6 minutes I became aware of a persistent buzzing which at first I took for a large fly. Slowly it dawned on me that this was a bee. Then there were two, three, four. I ended up with four or five buzzing around me in my room. I ignored them and they showed no inclination to sting but they hung around for another ten minutes or so when I decided to use a little smoke which cleared them pretty quickly. I observed another odd behaviour before I obtained the bees, or at least I’ve never heard of or seen it in relation to A. mellifera. I was attending Khandbari Bazzar with a friend, who sells oranges there, when we saw loads of bees buzzing around an open sack of ground rice. I saw the same thing on another occasion but this time on ground maize. Unfortunately I was a little too far away to see if they were filling their pollen baskets. This was at the end of January v. early in their season. Does anyone know what they were up to, or can anyone offer a possible explanation? My bees react very quickly to smoke, so quickly in fact, that I was concerned that it might be stressing them unduly. Anyway, I’ve taken to using a water spray. I still light up the smoker, with my favourite, dried orange peel, but keep it in reserve.

I’m having trouble uploading photos on the blog but nowhere near as much agro on facebook! I might have to go without the pictures. As you see I’ve got some pictures for the blog. There are a couple more showing Queen guards which I’ll put in my next blog.

← Installing Bees
Management of A. cerana →