After the Earth Quakes

About halfway between Dada Pangma and Khandbari this house was serving as a cafe come pub.

Any member of the Dartford Nepalese Society reading this, before your charity dinner on Saturday 23rd, Namaste, please pass my fond regards to all my good friends in the Dartford Nepalese Society and all the honoured guests attending your dinner in support of the people suffering from the effects of the earthquakes which struck us on the 25th April, and the 12th and the 17th of this month. Since I came to Nepal I’ve experienced three Earth Quakes, here in Dada Pangma, all of them frightening enough to get you out of the house, pretty quickly, but none of them enough to bring the house down. The first in November occurred in the evening, whilst I was in bed. The tremor continued for about thirty seconds or so and during this time I could hear my host and his wife entertaining guests, which is a regular occurrence. It seemed, judging by the conversation, that no one was in any way alarmed, the company just continued laughing and joking as normal, as if nothing out of the ordinary had happened or was happening. I began to think I was in a dream. I went back to bed only to be woken by an after-shock. This time I dressed quickly and went up to speak to Ram. Yes, there had been a Quake, but nothing out of the ordinary. Apparently Nepal suffers frequent small Earth-Quakes, though they’re not at all regular and can’t be predicted. A few months later we suffered the Earth- Quake on the 25th April which devastated whole villages in Ghorka and surrounding areas. High in the mountains avalanches and landslides were triggered, adding to the horrendous loss of life, sweeping whole villages away and ripping through orchards, farm-land and forests. Kathmandu fared only slightly better in terms of the intensity of the Quake, but with a much higher density of population, there were many fatalities and serious injuries suffered; most high rise buildings and many of traditional construction were rendered completely uninhabitable and historic World Heritage buildings that had stood for five hundred years or more were seriously damaged or reduced to rubble. This was, they say, the worst Earth Quake in Nepal for 80 years, with an intensity of 7.9 on the Richter Scale. The death toll, according to the “Voice Of America”, as a direct result of the Quake stands at 7500 but is expected to rise. The number of seriously injured is put at up to 14500. People in the UK knew the details and the severity of the disaster before we did in Dada Pangma, because we lost our electricity supply and the internet for three days following the quake. In those three days the International community responded magnificently and by the time we were in possession of the facts a massive relief effort was underway. Initially the help most urgently needed was food and shelter and this will continue to be the case for some time to come, but it should not be forgotten that the public infrastructure that people have come to expect as normal and in differing degrees, to rely on; electricity, albeit intermittent; water; telephone communication, which requires towers at regular intervals; and very importantly roads. Most of the roads in rural Nepal are un-mettalled and this leaves them much more susceptible to erosion and subsidence caused by water or to blockage by landslides. A majority of the roads in rural Nepal can only be negotiated by 4 wheel drive vehicles and lumbering tractors pulling large trailers. The earthquake has not only caused occasional road blockage, in some places it has rendered the roads unusable, over long stretches, even to the almost unstoppable tractors. This means that the only access to some communities in dire need, is by foot or by helicopter. I had some interesting insights into an unforeseen consequence of the Quakes, at the first tremor most people left their homes and didn’t return for some days. I have two families with whom I am friendly in Kathmandu both families live in a three storey house of the concrete “post and beam” type structure both have declared their houses to be sound and only to have suffered superficial damage but only one family has moved back in! I had asked for an update on how everyone was faring, on Messenger, and was surprised to hear that Nabin and his family are still living in a tent. I for one hadn’t considered the lasting trauma caused by not one but three Earth Quakes in quick succession! How long before they’ll be happy under a ceiling with two storeys of building above that?

The Top Bar on the left has a colony transferred from a log hive. the TBH on the left is awaiting a colony (a division ) from TBH1

The last tremor to be experienced here in the village occurred on 17th May and on the same day we had a thunder storm, a proper “Nepali thunderstorm”! They’re louder, a lot louder and the lightning flashes and crackles so violently that I for one flinch every time, but you don’t expect the lightning to strike the house you are sheltering in. It struck us! There was a group of young lads in my room playing games and watching Facebook on my Kindle when the Earth Quake happened. All the boys rushed out of the room laughing and joking, only to return a couple of minutes later when it became ‘obvious’ that the tremor was over. We returned to the room, me clutching my wallet and computer and the boys still stabbing their fingers at the Kindle. The lads sat themselves down and plugged the Kindle in. Two or three minutes later lightning struck, the house, or perhaps power lines nearby. There was an almighty crackling sound and the boy holding the Kindle threw it to the ground. The boys, this time wide eyed and open mouthed, but all, in a strangely subdued and orderly fashion left again and this time they didn’t return! 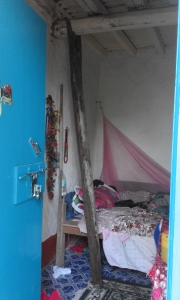 This support in my room went up as soon as we discovered that the beam across the ceiling was short of the wall by about an inch and a half!!

I’m struggling to upload this, I do my blog in word and then cut and paste into the website, but I’m having no luck with internet access. I leave for the UK on 26th May so I’ve only got 4 days left and two of those will be spent on a bus! Fingers crossed the roads around Kathmandu are in reasonable nick. Most approaches are along very steep hillsides, where I personally have seen evidence of landslides in the past. 22/5/2015 I travelled to Itahari today, the journey was exhausting, the road atrocious, I think  almost certainly because of the torrential rain we’ve had in the past week or so. I’ve got photos of trees snapped in two by gusts of wind generated by a thunder storm on 11th. Bits of roofing were torn off of people houses and the rain fell in torrents, gouging channels up to six feet deep in places along the road to Pangma. I have a few photos and videos which I’ll post as an addendum when I get home.

The metal frame you can see is our version of a mirror box for looking up under the brood chamber. The TBH has two colonies, the mother colony transferred from a log hive and a split from that colony.